The SkateHub commercial was a very fun and interesting project to work on, but at the same time, it was incredibly challenging. With a very short turnaround time and no idea how we were going to pull off half of the ideas in mind, we had to work fast and smart. 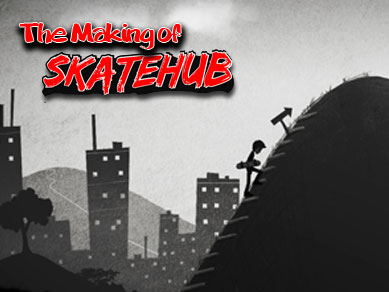 The folks at SkateHub had an initial concept that they wanted us to go with, and the major challenge for us was to fit their ideas into a 30 second spot. The project was directed by Bryan Waterman (of Waterman Studios), and he did an awesome job helping us mold and construct the original concept. Adjustments to the original idea had to be made in order to fit everything into the 30 seconds, but in the end everyone was happy with the outcome. 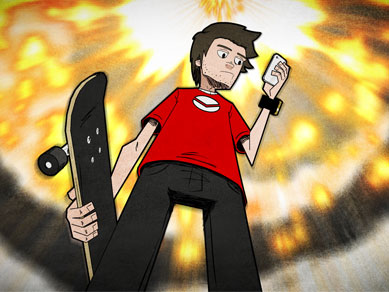 As soon as we heard that the project was focused on skateboarding, we immediately visualized the raw and sketchy art style. We didn’t know exactly how we were going to do it, but we knew that it had to be done. Ultimately, we ended up animating things in our traditional ‘Flash’ style, then coming back and hand sketching the shadows onto the characters. This was a very tedious process that we really weren’t sure if we could finish within the short turnaround time, but we managed to pull it off! 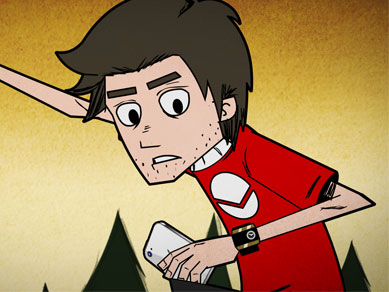 We also wanted to include a thick outline around the characters to further push the art style, but we had no idea how achieve that. We were very close to going without, but at the last minute, an idea for a technique came to mind and we were very happy with the results. We have even been asked numerous times how we achieved the thick outline look. The process turned out to be pretty simple, but (as always) very tedious. 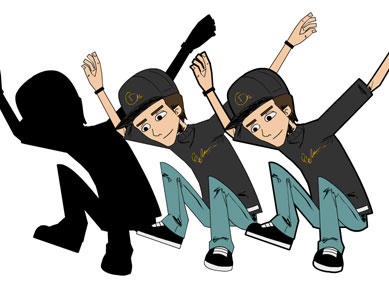 Basically we completed the animation first, then duplicated the character’s layer, broke up all groups, graphics, and lines of the character on that duplicated layer (so that the art was a solid fill), and lastly we added a new outline around the blackened character (on the duplicated layer). This way we were able to completely control the outline thickness and keep it consistent. We had to repeat this process for each frame, so it was absolutely vital that the animation was finalized first. For that reason, it was a good thing that we figured it out at the last minute! 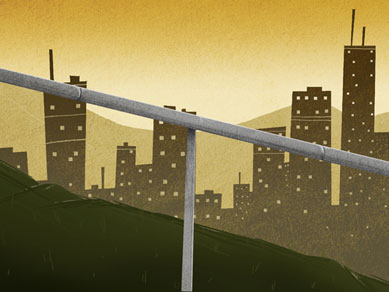 From the very beginning, we knew that the world had to look pretty abstract in order to fit our character designs. This was uncharted territory for us because our style was usually simple and very “Flash” looking. The backgrounds were all designed in Photoshop, which gave us a lot of possibilities and room to experiment. We personally love the end result! 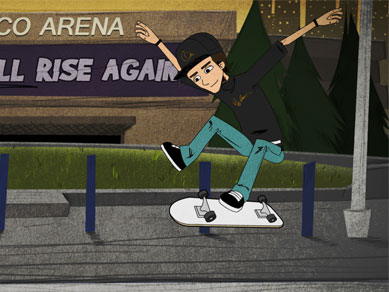 There was a part in the storyboard where Chad (our main character) and his buddy come across a pro skater. How could we portray that a skater is a “pro” in 2.8 seconds with no audio or dialogue? Make him do an awesome kick flip into view! We spent many hours researching and figuring out what is one of the most challenging kick flips to land, and this eventually lead us to the 360 hard flip. 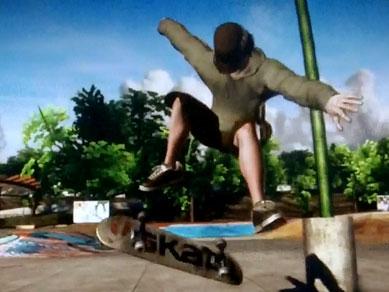 With that in mind, our next challenge was to animate this kick flip. We couldn’t find any decent reference footage to use, so we had a cool idea use one of our favorite skateboarding video games, simply called “Skate”. We fired up the game, performed the trick, and used the replay feature to rewind and fast forward at any speed and angle that we needed. Thanks to that reference, the animation came out beautifully! 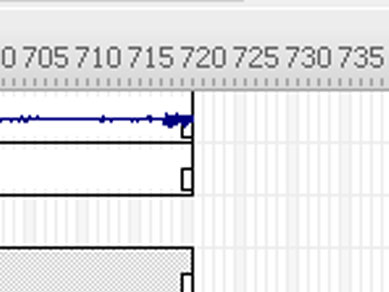 The last time that we worked with such a strict time constraint on animation was in Everything Animated where the animation was not allowed to exceed 30 seconds (or 720 frames). In Everything Animated, we had the freedom to play it safe and have our animation come out to a total of 29 seconds. We didn’t have that freedom in this project. The commercial had to be exactly 720 frames. No more, and no less. This proved to be incredibly challenging as we snipped frames from certain shots and added them to others, and really spent a lot of time adjusting the frame count on each shot in order to make things flow as smoothly as possible. 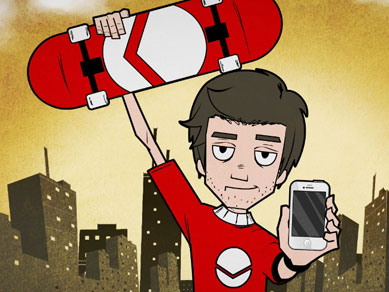 We managed to have the project finished and sent off the night before the deadline. With the short time that we had to work on it, things turned out looking way better than we originally expected, and everyone absolutely loved the final product. We managed to implement everything that we had hoped for, and we were very satisfied with the outcome. As always, we have learned some new tricks from this experience that have gone into other projects that we worked on after this one, and will surely continue to benefit us in the years to come.