The idea of Twelve A.M. originally came to us in the early part of October 2008. We wanted to do a holiday-themed project, and since Halloween was right around the corner, we decided to focus our attentions there and come up with something spooky.

The idea didn’t work out too well, as we were unfortunately unable to give it the proper attention and demand that it needed. Halloween quickly came and went, and we had made little to no progress within that time, so we decided to scrap the project. Little did we know that his project would ‘haunt’ us for the next year, constantly regaining our attention until we decided to finish what we started. 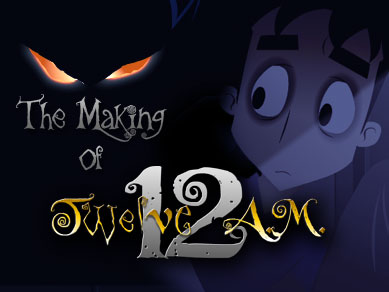 When developing the story, our initial ideas took us in many different directions. We knew that it was going to be Halloween themed, but we didn’t know exactly what we were aiming for. We didn’t want to take ideas too far because we wanted to keep the length of the project short, but at the same time we didn’t want to cut ourselves short. Twelve A.M. was our very first horror-themed project, so it was an exciting opportunity to try something new. 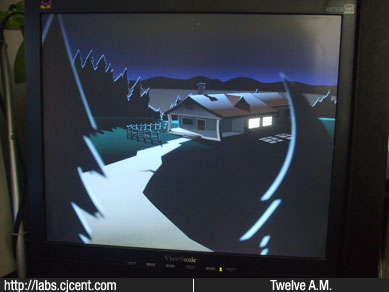 The original idea began on the basis of paranoia. We wanted to portray the experience of being alone in the dark and having fear make your imagination go wild with scary possibilities of what could happen. 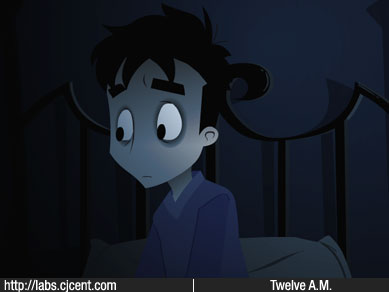 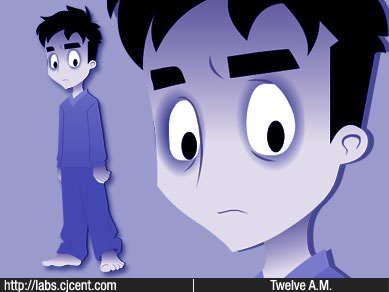 The main character of the story is Tyler; a young boy with a big imagination. He decided to stay up late and watch a spooktacular spook-a-thon consisting of old horror films, such as the classic “The Return of the Vampire.” However, this night in particular was a little different. At the stroke of midnight, something strange happened… 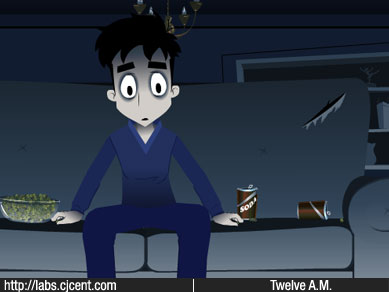 As the story continued to change, Tyler changed with it. Originally he was much older, and his art style was completely different. 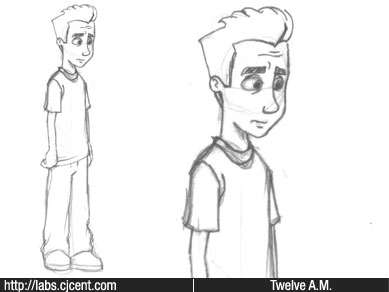 When we reached the final design, Tyler’s new look paved the way for everything else. From lamps, to beds, to couches, to trees, to bushes, to windows – the art style of the world was built around Tyler. The art style in general was inspired by Tim Burton and some of his animated films, such as ‘The Nightmare Before Christmas’ and ‘The Corpse Bride,’ as well as Henry Selick’s ‘Coraline.’ 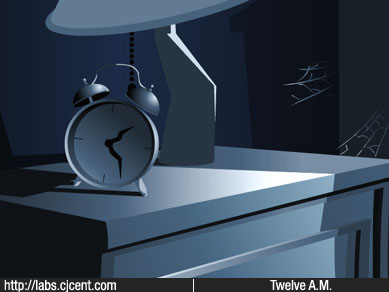 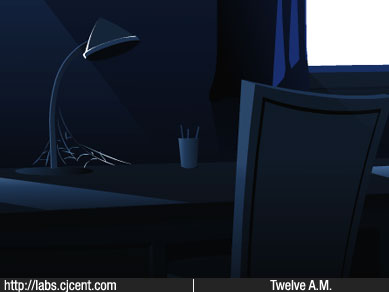 We wanted to capture that unique look and feel, but at the same time, we wanted to make it our own and stay within our own guidelines. The character design of Tyler himself became an inspiration, and he set the guidelines for us. Ultimately, the visuals came out satisfactory, but there were some things that we were unable to achieve. 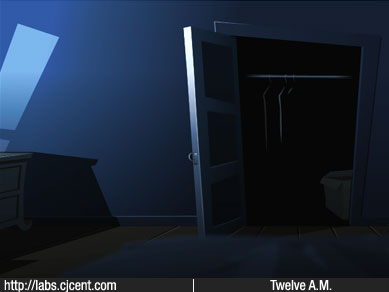 There was one problem in particular that had us stumped for months. We wanted this short to look very dark, but the brightness differed on different displays (CRT, TV, LCD, ect.). We tried to cater to all displays, and that put us in quite a predicament. We’re weren’t used to working with dark scenes, so this problem had hindered us to the point of completely halting production. 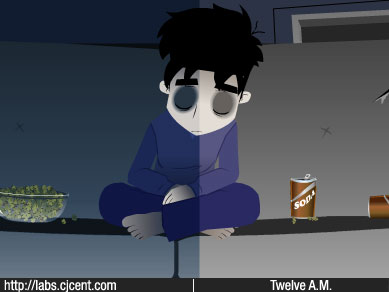 We came back to it a few months later and figured that we would just proceed with production and worry about the darkness balance afterwards. We ultimately accomplished this by adding a dark-blue adjustable tint with an ‘overlay blend mode’ on top of all scenes. At first, we were trying to make everything darker by using a black blend, but we quickly learned that blue worked much better. It produced the illusion of darkness without making everything too dark. 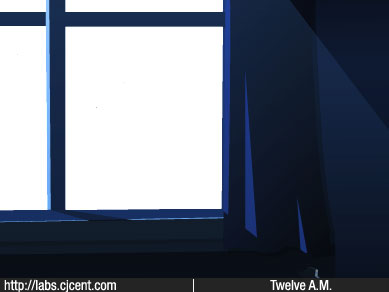 The white windows may come off as confusing or as a mistake, but it was all well intended. We used the white windows to differentiate the real world from Tyler’s dream world. In some way, we wanted to indicate that Tyler was dreaming and that the world was no longer real. 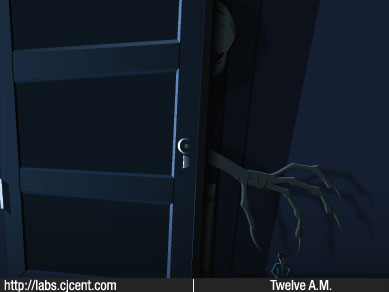 When it came time for the creature design, there was a particular essence that we were hoping to obtain. At this point, the story was finalized, the storyboard was in development, and we knew exactly what would be happening. We just needed to find the perfect candidate (or creature) to fit the role. This is where we sought the help of our good friend and fellow artist Candice Hayes, who managed to create the perfect creature for us. 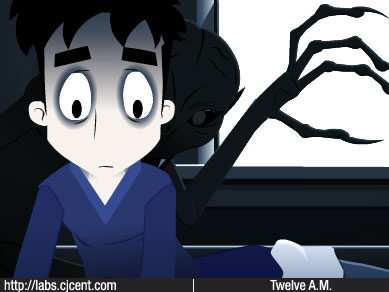 She managed to take our half-baked thoughts, and transform them into something that was not only spot-on to what we were trying to express, but something that was fun to work with! It fit quite nicely into Tyler’s world (and his closet). We are eternally grateful for Candice’s help, and hope to collaborate with her again in the future.

THE SOUNDS OF TWELVE A.M. 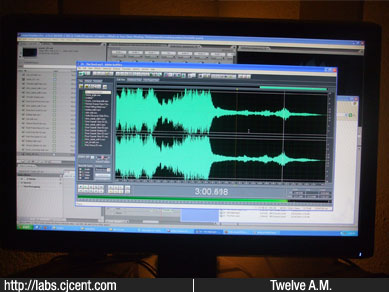 This project marked the first time that we were able to use our set of sound effects from Sony Pictures, which we had acquired sometime in May of 2009 (well after Twelve A.M. was put on the back-burner). 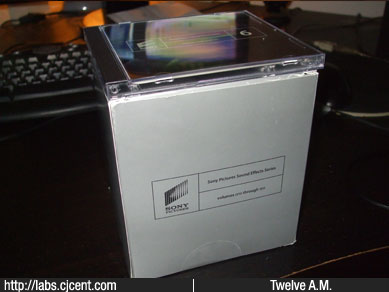 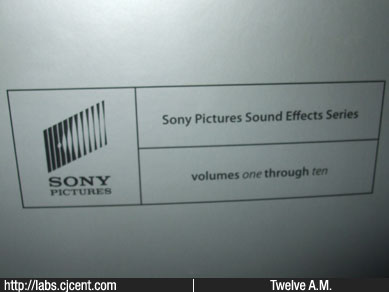 We were very excited to work with these professional sounds, and were happy that we no longer had to worry about creating or finding low quality sound effects on the internet. When we first purchased this library, Twelve A.M. had long since been pushed aside and out of production. This library played a major role in inspiring us to continue with the project. 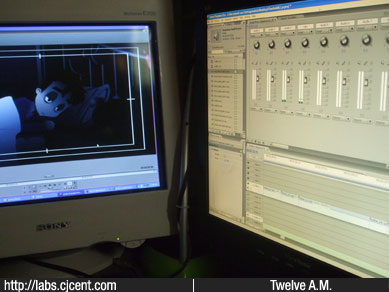 We literally came up with the title of the story while in the latter part of post production. Originally were calling it ‘What’s In Your Closet?’ (inspired by Capital One’s ‘what’s in your wallet?’ commercials), but figured that it gave away too much of what was going to happen. We were later going to use the title ‘Paranoia’ which had a nice ring to it, but realized that it didn’t apply to our story anymore. We eventually ended up forgetting about titles altogether… It wasn’t until the project was literally 99% complete, that we realized that we still didn’t have an official title. Watching the short film as a whole ultimately inspired the title ‘Twelve A.M.’ 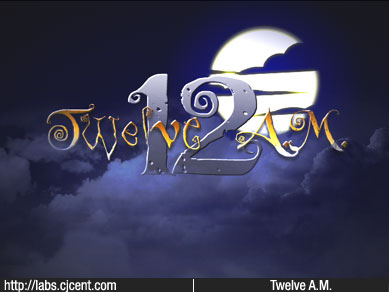 Immediately after coming up with the official title, we started work on the intro. Our minds instantly went to the cover for ‘The Nightmare Before Christmas’ and we wanted to create our own rendition of that incredible cover. 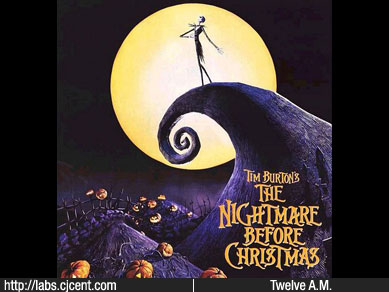 The large moon and the ever-so-memorable curly cliff that Jack Skellington stood on were key inspirations for our title’s look. A few hours later, we had our opening!

Ultimately we finished the project on Halloween night in 2009, exactly one year after our original missed deadline. The 5-minute short eventually went on to earn us our second consecutive ‘Animation of the Month’ award at toonlifeonline’s ToonTube, which we are very proud of. 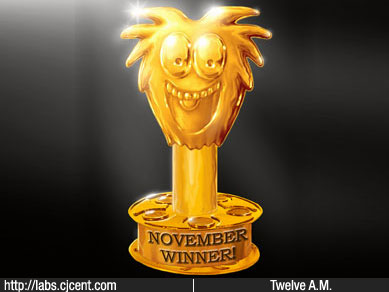 Although it was a very bumpy ride to completion, we were happy with the results. It wasn’t our best work, but the project did take us through some new obstacles in which we learned some new things that will surely benefit us in the future.